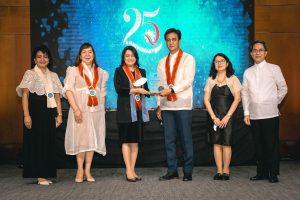 The Philippine Quality Award (PQA) celebrated its silver anniversary with the theme “Celebrating Culture of Excellence, Cultivating Competitiveness and Innovation” on October 12, 2022, at the Philippine International Convention Center.

The celebration highlighted the PQA’s achievements and recognized its stakeholders who played significant roles in its advancement, including the Development Academy of the Philippines (DAP). The PQA Award Manager conferred a special recognition to DAP for its 25 years of continued support to the program and for collaborating with the Department of Trade and Industry Competitiveness Bureau’s (DTI-CB) initiative to conduct the PQA 25th Anniversary celebration.

As the Award Manager, the DTI Secretary Alfredo Pascual graced the event. During his keynote speech, he highlighted the vital role of the PQA in nation-building and fostering a culture of excellence among organizations in the Philippines, both in the public and private sectors.

Moreover, one of the event’s highlights is the recognition of organizations with the highest level of excellence and have received the PQA for Performance Excellence in the past 25 years – Unilab Laboratories, Inc. and Toyota Motor Philippines.

The PQA also honored the contributions made by Dr. Luis Maria Calingo, who served as the PQA technical expert and consultant since 1997, through the launching of the Dr. Luis Maria R. Calingo Excellence Award. The award aims to recognize prominent individuals and organizations with significant long-term contributions to the advancement of the PQA.