After three years, the Public Management Development Program (PMDP) welcomed the 30th batch of the Middle Managers Class (MMC) in a face-to-face opening ceremony on 5 September 2022 at the DAP Conference Center in Tagaytay City.

DAP President and CEO Atty. Engelbert Caronan, Jr., in his welcome remarks, congratulated the scholars for making it into the Program and reminded them that their presence in the ceremony is a testament to their being high-performing and high potential public servants — a cut above the rest. He further said that their admission to the MMC attests their passion for continuous self-improvement and urged them to seize every learning opportunity to take public service to the next level. 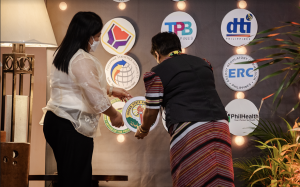 Lordinio A. Vergara, class president of MMC Batch 29-Talaghay, threw the challenge of excellence to the incoming batch. “Aside from the learning process itself, be ready to venture in trailblazing programs and campaigns that will back up much-needed reform and recalibration in our system of public service. On top of it all, do not forget to build indefatigable rapport among you, the noble members of Batch 30. Sila ang pinakamahalagang kakampi ninyo sa laban na ito kaya huwag palalampasin ang pagkakataong kumonekta,” advised Vergara.

On the other hand, Abraham Kalim from the Bangsamoro Autonomous Region of Muslim Mindanao (BARMM) accepted the challenge on behalf of MMC Batch 30 and expressing their class’ excitement and pride for having been accepted to the Program after all the intensive and grueling processes. He shared that, as future leaders of this country, they are fully aware of the hardships and sacrifices they have to endure as they tread the path of excellence and self-realization. 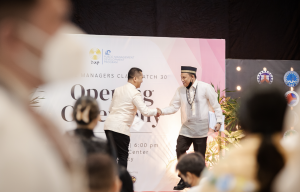 National Economic and Development Authority Region IV-CALABARZON Assistant Regional Director Susana S. Santiago, MMC 8-Siklab alumna, served as the inspirational speaker. She described her time as a PMDP scholar a worthwhile experience. Santiago advised the members of MMC Batch 30 that that “it is okay not to be okay” as it will be part of their journey as scholars and their experiences will be worth it.

Career Executive Service Board Executive Director Maria Marcy C. Ballesteros, representing the NGCESDP Steering Committee, reminisced about her time as a Senior Executives Class Batch 3-Sinagtala alumna, declaring that the PMDP is their road to better opportunities to serve the higher civil service. Ballesteros advised the new scholars to develop a strong network among themselves as this will benefit them as well. She also urged them to embrace opportunities to collaborate and to be inclusive in governance for it is the key to success as a nation and will help them grow as individuals.