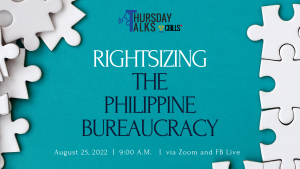 The Development Academy of the Philippines, through its Center for Governance-Policy Research Office (CFG-PRO), held the fourth installment of the Capability Building on Innovative Leadership for Legislative Staff (CBILLS) Program’s Thursday Talks: Webinar Series on Socio-Political and Economic Perspectives, which tackled government restructuring and reform through a webinar titled “Rightsizing the Philippine Bureaucracy.”

The webinar, conducted last August 25, examined the Philippine experience in rightsizing and re-organization. It also explored the intentions and implications of the proposed National Government Rightsizing Program (NGRP) in enhancing the government’s institutional capacity to perform its mandate and provide better services while ensuring optimal and efficient use of resources in line with the Mandanas-Garcia ruling and the bureaucratic efficiency and fiscal management initiatives of the government.

“Rightsizing may result in improved efficiency and delivery of public goods and services if these efforts are grounded on economic principles, are conducted across national government agencies, and considered the changing needs of client citizens,” emphasized by Dr. Charlotte Justine Diokno-Sicat, research rellow at the Philippine Institute for Development Studies.  She also specified the Philippine experience in public sector reform and her assessment of current legislative initiatives in rightsizing the bureaucracy, and presented a case study to show how local government units may benefit from rightsizing efforts.

On the other hand, Atty. Maria Paula B. Domingo, director of the Systems and Productivity Improvement Bureau of the Department of Budget and Management, presented the salient features of the proposed National Government Rightsizing Program (NGRP) and provided policy recommendations on the challenges encountered in rightsizing efforts that were introduced in the previous Congress. Atty. Domingo underscored the importance of rightsizing in creating a lean, agile, and responsive bureaucracy as well as in providing quality public goods and services more efficiently and effectively. 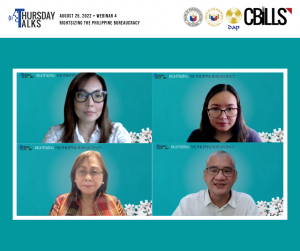 Panel discussants Dr. Maria Lourdes G. Rebullida, professorial lecturer for the Department of Political Science and the National College of Public Administration and Governance of the University of the Philippines, and Jose Enrique A. Africa, executive director of IBON Foundation, shared their insights and analyses on rightsizing and other challenges in government reform. Both problematized the guiding principles, scope, and potential impacts of rightsizing efforts in the light of the current Philippine bureaucracy and in broader development issues. They offered policy recommendations on the delineation of roles of government offices, improvement of current processes and operations, consultation and transparency in legislating the NGRP bill, and capacity building and upskilling of civil servants, among others, that would ultimately enhance government capacity in fulfilling agencies’ respective mandates and effectively addressing citizens’ needs.

The livestream of this event can be accessed through the Policy Research Office Facebook Page at www.facebook.com/DAPCFGPRO. Watch out for the next webinar on “Education in the Philippines: Addressing the Learning Gaps in the New Normal” on September 22.